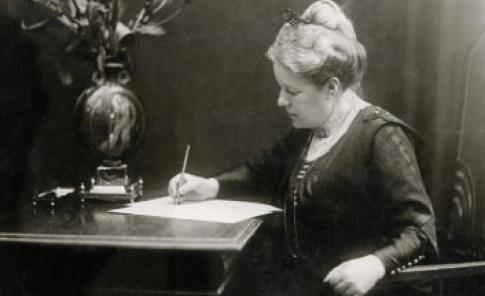 Swedish novelist, who in 1909 became the first woman writer to win the Nobel Prize for Literature. Lagerlöf's work is deeply rooted in Nordic legends and history. She turned away from the dominating realistic movement and wrote in a romantic and imaginative manner about the peasant life and landscape of Northern Sweden. Her great neoromantic rival was Verner von Heidenstam, winner of the Nobel Prize for Literature in 1916. Lagerlöf's internationally best-known book is the fairy tale NILS HOLGERSSONS UNDERBARA RESA GENOM SVERIGE (1906-07, The Wonderful Adventures of Nils).

"Nils had grown so giddy that it was a long time before he came to himself. The winds howled and beat against him, and the rustle of feathers and swaying of wings sounded like a great storm. Thirteen geese flew around him, flapping their wings and honking. They danced before his eyes and they buzzed in his ears. He didn't know whether they were flying high or low or in what direction they were travelling..." (from The Wonderful Adventures of Nils)

Selma Lagerlöf was born in Mårbacka, in the province of Värmland in southern Sweden, where she grew up largely apart from other children in the little family estate. Her father was a retired army officer and her mother came from a family of clergymen. Lagerlöf was tutored at home by her father and grandmother. In the care of her paternal grandmother she heard fairy tales and legends, stories about the glorious past of the great estates in the Värmland region, a world of cavaliers, sleighing parties, and superstitions. Lagerlöf's childhoom home was sold in the 1880s, when her father died and money was needed to settle his debts. The writer bought it back in 1904.

Lagerlöf studied at the Royal Women's Superior Training Academy in Stockholm, graduating as a teacher in 1882. From 1885 to 1895 she worked at a girl's school at Landskrona. While teaching, she began writing a novel, the first chapters of The Story of Gösta Berling, which she sent to a literary contest, sponsored by the magazine Idun. Lagerlöf was awarded a prize, and was offered a publishing contract for the whole book.

Supported financially by her lifelong friend Baroness Sophie Aldesparre, Lagerlöf completed her first novel, GÖSTA BERLINGS SAGA (The Story of Gösta Berling), which appeared in 1891. The book sold poorly. After Georg Brandes wrote a positive review of the Danish translation in 1893, the work became a part of the Swedish Romantic revival of the 1890s. In the episodic tale, set in Värmland, an estate is run to wrack and ruin by a group of adventurers, "cavaliers of Ekeby", in accordance with the plan of the evil Sintram. Among the twelve gallant and reckless cavaliers is young Gösta, the temperamental hero. "Before her knelt Gösta Berling. He had a face compassionate as a poet's and bold as a soldier's. His eyes were deep, glowing with wit and genius; they invited. He was supple and full of strength, fiery and intriguing." Gösta's magnetic personality inevitably draws people to him. Eventually he marries the Countess Elisabeth, whose husband has divorced her. Through Elisabeth's influence and his own efforts, he is able to find peace in his life. A film version of the story was made in 1924 by Mauritz Stiller, starring Greta Garbo. HERR ARNES PENNINGAR (1904) was filmed by Mauritz Stiller in 1919.

OSYNLIGA LÄNKAR (1894, Invisible Links), a collection of short stories, gained an immediate success. In 1894 Lagerlöf met a fellow writer Sophie Elkan (1853-1921), who became her lifelong companion, and whose biography Lagerlöf left unfinished at the time of her own death. Lagerlöf's letters to Elkan, DU LÄR MIG ATT BLI FRI, were published in 1992.

With a fellowship granted by King Oscar and financial assistance from the Swedish Academy, Lagerlöf devoted herself entirely to writing. She settled in Falun, where she spent most of her life. After travels in Italy and Sicily with Elkin, Lagerlöf published ANTIKRISTS MIRAKLER (1897, The Miracles of Antichrists), a socialist novel about Sicily. A journey to Egypt and Palestine (1899-1900) inspired JERUSALEM: I DALARNE (1901) and JERUSALEM: I DET HELIGA LANDET (1902), critically acclaimed works, which established her fame as the foremost Swedish novelist. The collection of stories, set in the 1890s, tells about the disruptive effects of a religious revival on a traditional rural community in the province of Dalecarlia. The title refers to a pilgrimage to Jerusalem, for which the land of an old peasant family, the Ingmars of Ingmarson, is finally sold at an auction by one member of the family. Another Ingmar, however, renounces his fiancée and marries a rich woman in order to save the farm.

Lagerlöf's most popular children's book is The Wonderful Adventures of Nils, which was partly inspired by Rudyard Kipling's animal stories. The work was commissioned by the Primary School Board as an aid to the teaching of Swedish geography. In the two-volume story a fourteen-year old boy, Nils, is transformed to elf-size because of his own selfish naughtiness. Nils is the son of poor farmers. His chief delight is to eat and sleep, and "after that - he liked best to make mischief." He jumps on the back of the farm's gander, who joins a flock flying north, to Lapland. Nils Holgersson travels the length and breath of Sweden with the wild geese and learns unselfishness from them. The story has a strong moral tone, and its plea to respect Nature is today even more urgent. Looking at the Swedish way of life from the air and on the ground, Lagerlöf gives her readers much information about her native country, its geography, history, and its mythological past. When the Japanese novelist Oe went to Stockholm to receive the Nobel Prize for Literature in 1966, he said that in his youth he had read the book many times, and felt that he knew Sweden already. Another admirer of the book in his childhood was the philosopher Karl Popper (1902-1994). "For many, many years I reread this book at least once a year," he confessed in Unended Quest (1974), "and in the course of time I probably read everything by Selma Lagerlöf more than once."

Fantasy is an important part in many of Lagerlöf stories and novels. KÖRKARLEN (1912) was based on a legend alleging that the last man to die on New Year's Eve must drive Death's cart during the coming year. In the frame of a supernatural story Lagerlöf dealt with social problems. Victor Sjöström's movie adaptation of the book, The Phantom Carriage (1921), is considered with its dramatic effects one of the greatest Swedish film classics.

In 1914 Lagerlöf was appointed a member of the Swedish Academy. During World War I she wrote little; KEJSARN AV PORTUGALIEN (1914), a story of truth, lies, and fantasies, is often mentioned as her last great achievement. The pacifist novel BANNLYST (1918) dealt with the evils caused by the war. In the 1920s Lagerlöf devoted much time to women's causes. She published short stories, the Värmland trilogy LÖWENSKÖLDSKA RINGEN (1925), CHARLOTTE LÖWENSKÖLD (1925), ANNA SVÄRD (1928), and a biography of the Finnish author Zachris Topelius. Her autobiography, which comprised several volumes, was very popular in the 1930s.

In her short stories Lagerlöf often blurred the border between dreams and reality. Sometimes she borrowed elements from or fairy tales or Victorian supernatural fiction. EN SAGA OM EN SAGA, OCH ANDRA SAGOR (1908) includes one of Lagerlöf's most anthologized religious fables, 'The Legend of the Christmas Rose'.

In 'Old Agneta' a woman lives alone in a cottage on the edge of a broad glacier. In the solitude of the mountains, she starts to talk to herself. She feels that she is already frozen with the cold and her empty life, and wants to die because nobody needs her. A monk comes to her and shows that she is not alone-the mist and fog of the snow-covered mountain are in reality a host of lost souls. Agneta burns candles in her cottage for the ghosts, who are attracted by their light and warmth. "Where would the souls of the departed find a refuge from the boundless cold of Death, if the old ones here on earth did not throw open their hearts to them?" She is happy because she knows that she is needed. After she dies, the mountain is lit by the ghosts with tiny yellow flames.

As World War II approached, Lagerlöf helped German intellectuals and artists to escape Nazi persecution. She managed to arrange a Swedish visa for the poet Nelly Sachs, and saved her from the death camp. When Finland fought against the Soviet aggression during the Winter War, Lagerlöf donated her gold Nobel Prize medal for fund-raising to help the struggling country. In the midst of her efforts to provide war relief to the blockaded population of Finland, she died of a stroke at her home on March 16, 1940.