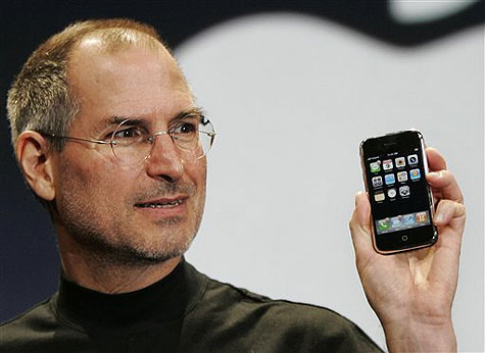 THE PASSING of Steve Jobs on 5 October 2011 is a watershed moment. Rarely has one man deserved credit for changing not one but several industries and the way people interact with information technology in such a short period of time.

Jobs didn't graduate college, but his accolades include genius, visionary and innovator, examples of which can be seen throughout his career. When Jobs worked alongside Steve Wozniak, Wozniak was credited with being the brains behind the operation, a considerable disservice to Jobs. Wozniak built the first Apple personal computer, but Steve Jobs was the man that saw how to harness people's talents, including his own, and create a company, a product and ultimately a brand that would be unlike any other.

Looking at Jobs from a hard-nosed business point of view, there is no question of his ability. After Apple's board forced Jobs out it almost went bankrupt, and after the company brought him back, its market capitalisation eventually surpassed that of any other information technology company. Put simply, Jobs made the financial graphs go in the right direction and, as a famous crooner sang, he did it his way.

Jobs' way was to push new technology ahead of the industry by understanding what the majority of users wanted. It was a strategy that polarised opinion but it also one that worked most of the time. There were the obvious wins, such as the Apple Macintosh with its graphical user interface and the Ipod with its click-wheel (though Apple later lost a patent battle against Creative Labs over the click-wheel). However there are many more innovations that rarely get mentioned.

Apple was the first company to completely banish the 1.44MB floppy drive from its machines, which at the time caused a stir, yet now seems absolutely normal. Apple's Macbook Air was a £1,500 laptop without a DVD drive because Jobs claimed people didn't use disc media all that often. Again he was pilloried by some, but history will prove he was right and being right was what Jobs cared about.

Arguably, Jobs' biggest and most undervalued victory as both a businessman and visionary is not even in the information technology business. Jobs was the man who fought the record labels in order to create a system where customers could purchase an album of songs they wanted, not what the recording label dictated. Jobs realised that customisation and price reduction were the only way to tempt customers to pay money for music at a time when millions were downloading it for free.

Eventually, Jobs made the record bosses come around and Itunes was born. Although Itunes wasn't the first online music store, it did what Jobs is famous for - it was the best. The recording industry will be forever indebted to the man that changed the music business forever.

And Jobs didn't stop with changing the information technology and music businesses. He also co-founded Pixar, an animation company that changed the movie business, taking animation beyond anything Disney had done previously. A string of hits resulted in Disney purchasing Pixar and Jobs becoming its single largest shareholder.

Many liked to play up rivalries between Jobs and other consumer information technology leaders, but the truth was that the industry respected and liked Jobs. For years the supposed rivalry between Jobs and then Microsoft CEO Bill Gates was built up, with the appearance of both men on stage at All Things Digital 5 sold as a brawl between industry giants. In the end the two men recounted old stories, highlighting their friendship and mutual respect for each other.

More recently with the Apple-Google relationship souring and Google's CEO Eric Schmidt resigning from Apple's board, it was thought the two men would be spitting venom at each other. Instead, Jobs and Schmidt were seen drinking coffee and chatting like two old college chums. In business Jobs may have been the archrival, but not one company CEO can say Jobs was bad for the industry - if anything he had a hand in sprouting several new ones.

The many tributes to Steve Jobs not only show just how much influence the man and his company have had on everyday life, but they highlight the esteem with which he was regarded, not just among his peers but the wider public. How many technology CEOs' deaths would prompt a public condolence message from the President of the United States?

Wozniak once said, "Steve had dreams of being a great person, like Shakespeare and Einstein, who are well known throughout the centuries." In the world of information technology, it could even be said that Jobs had the same effect as Shakespeare or  Einstein in their fields, as he certainlychanged the way people think about, create and use technology.

Usually the phrase "he will be remembered" has somewhat of a hollow ring, but Steve Jobs can rest in peace knowing that he and his ideas will forever be remembered. µ