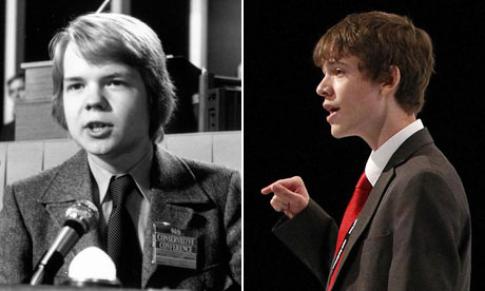 A 16-year-old from Maidstone stole the show at the Labour party conference, eclipsing what many shadow cabinet ministers could have hoped for and winning a standing ovation from activists.

In scenes reminiscent of a teenage William Hague addressing the Conservative party conference in front of Margaret Thatcher in 1977, Rory Weal wowed delegates with an impassioned speech that had Ed Miliband jumping to his feet to shake his hand.

Rory, who lives with his mother Elaine, an administrator at a cleaning company, and eight-year-old sister Emma, took the week off school to attend the conference in Liverpool.

He is studying for four A-Levels – English literature, geography, politics and history – at Oakwood Park Grammar in his home town, having gained seven A*s and four As in his GCSEs.

As he walked off the stage to a standing ovation, delegates came up to shake his hand and give him a pat on the back. Speaking afterwards, he said: "I think a lot of my friends are quite angry at what this government is doing with tuition fees. It's important to get more young people involved."

Rory, who only joined the party after the last general election, said he did not know what he wanted to do after school but added he would "quite like to go into politics in the future".

In his speech, hailed as "brilliant" by shadow chancellor Ed Balls, the teenager tore into the government over welfare cuts and the abolition of the education maintenance allowance.

He said: "Two-and-a-half years ago, the home I had lived in since birth was repossessed … I owe my entire wellbeing and that of my family to the welfare state. That is why I joined the Labour party.

"That very same welfare state is being ruthlessly ripped apart by a vicious, right-wing Tory-led government."

He continued: "I wouldn't be here today if it wasn't for that system, that safety net. So I take this opportunity to plead with the government to reconsider their measures.

"Their measures for young people, which will divide a generation and seriously threaten the British promise that Ed Miliband has spoken about, where one generation does better than the last.

"Their measures on welfare, such as the housing benefit cap which will potentially make 40,000 people homeless and hammer the most vulnerable people in society."

Rory added: "It is up to us in the Labour party to create a vision of what a better Britain looks like. Let's get to work."
guardian.co.uk