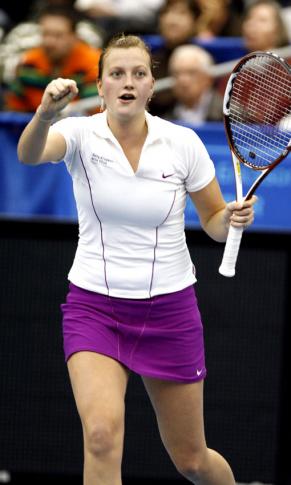 The unstarry, unaffected Petra Kvitova, a 21 year-old from the Czech Republic who thinks of herself as a "jeans and T-shirt" kind of girl, and who could not even tell you who her favourite clothes designer is, played with a nerveless ease to defeat Sharapova on Centre Court for her first grand slam title.

It had been widely supposed that this title-match would bring a comeback victory for the world's highest-earning sportswoman, for the groomed and polished Sharapova, for the lady whose face has launched a thousand advertising campaigns, yet she was beaten by someone who does not appear to know how good she is.

Kvitova, ranked eighth in the world, certainly does not have the look of an athlete who has spent much time considering her own worth. Had Sharapova won this match, kisses would have been blown to all corners of Centre Court; in the moments after Kvitova's 6-3, 6-4 victory, which she had completed with an ace banged through into the backstop, the Czech sat on her chair with her hands covering her mouth.

During an on-court interview with the BBC, Kvitova broke off and half turned away when she thought that Sue Barker was finished with her, so looking every bit like someone not used to what happens after winning a title on a big occasion. Soon after being presented with the Venus Rosewater Dish, she walked off the turf and was shown the honours board, which already had her name on it, and she let out a little embarrassed giggle, and she was then a touch self-conscious and awkward, though obviously pleased too, after she took the trophy out the back of the stadium to show the crowds.

Kvitova made for a low-to-middling tennis celebrity, and a superb, delightful Wimbledon champion.

So Kvitova became the youngest Wimbledon champion since Sharapova won this title as a 17-year-old in 2004. Whenever anyone looks back to that final, when Sharapova defeated Serena Williams, they remember it as the afternoon when she gave birth to a brand. While no one is ever going to win Wimbledon and keep a low profile, it did not feel as though this was the moment that launched Kvitova as a megastar.

That is not to criticise or to patronise her; not everyone can have, and not everyone wants to have, Sharapova's life. Though Sharapova and Kvitova are both very tall, very modern Eastern Europeans who cuff the ball, they are plainly not two chips from the same Eastern Bloc.

Sharapova was born in Siberia; but she is really a product of Florida and that tennis factory known as the Nick Bollettieri Academy. Kvitova, who was born in the Moravian-Silesian region of the Czech Republic, still lives in the family home in the small town of Fulnek.

Whatever Kvitova lacked in poise after the match and between points, she showed plenty when the tennis was actually being played. Plus, a lot of strength in her arm. There have not been many occasions in Sharapova's tennis life when she has been out-hit, but this was one of them, as Kvitova prevented Sharapova from winning her first grand slam since the 2008 Australian Open and since the operation to her shoulder.

Once again, Sharapova had some problems with her serve. In her semi-final against the German wild card Sabine Lisicki, Sharapova had struck 13 double-faults, and she committed another six in this final, including a run of three in a row spread over two games. But Sharapova, who had reached the final without dropping a set, did not beat herself with her own serving yips; she was beaten by Kvitova's fine grass-court tennis.

When Kvitova arrived at the All England Club last summer she had never won a match on grass (she had lost her first four appearances on the surface), and then she made the semi-finals, She came back this year and won the whole thing. What was so welcome about this result was that Kvitova was playing freely and taking big swings; in contrast, you could say, to the careful, overly-defensive play from Caroline Wozniacki, who is officially the best player in the women's game, but who is yet to win a major.

This was one for the lefties. No longer do you have to cast around in the Royal Box for the last left-hander to have won this tournament. Given all the supposed advantages of being a leftie on a grass court, it is strange to think that, before this match, the last southpaw champion was Martina Navratilova, the winner here in the summer of 1990.

That was when Kvitova was just four months old. Navratilova was here to see this. In the Open era, only four left-handed players have appeared in grand slam finals – Ann Jones, Monica Seles, Navratilova and now Kvitova. However, you could say that, for a moment or two, this was an all-left-handed final.

Sharapova, who is ambidextrous, played left-handed until she was 10, and on a couple of occasions, after being sent wide on what would have been her backhand side, she switched the racket into her other hand and attempted a leftie forehand. The most emotional moment came when Kvitova looked up at Navratilova and also at Jana Novotna, who had previously been the last Czech woman to have won this tournament with her victory in 1998. Kvitova's eyes turned pink and puffy.

Kvitova had been oblivious to Sharapova's grunting. The fact that she had played the shrieking Victoria Azarenka of Belarus a round earlier was probably useful as it meant that she had recent experience of dealing with a screamer. But perhaps she would have been oblivious anyway. Kvitova was oblivious to a lot of things. She just went out there and played, hit the ball hard and won Wimbledon. Everything else, you could say, is just nonsense and fripperies.