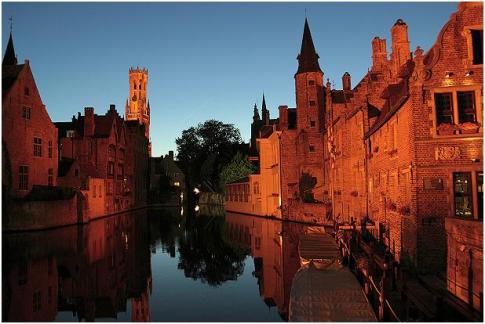 The history of Bruges begins in a very modest way more than 2000 years ago as a Gallo-Roman settlement. The name Bruges comes from the Old Norse "Bryggja" which means 'landing stage'. The name Bruges appears on documents and coins in the middle of the ninth century. At that time, there was already a strong citadel in Bruges.

Bruges has a long tradition of international port activity. The oldest trade settlement of Bruges and the early medieval port were accessible from the sea until around 1050. A storm flood in 1134 reshaped the Flemish coastal plain: a deep channel appeared, the Zwin, which at the time reached as far as present day Damme. The city remained linked to the sea until the fifteenth century via a canal from the Zwin to Bruges. But Bruges had to use a number of outports, such as Damme and Sluys.

By the eleventh century, Bruges had expanded to become a commercial centre for Europe. With the reawakening of town life in the twelfth century, a wool market, a woollens weaving industry, and the market for cloth all profited from the shelter of city walls, where surpluses could be safely accumulated under the patronage of the counts of Flanders. Bruges was already included in the sequential circuit of the Flemish cloth fairs at the beginning of the thirteenth century. The city's entrepreneurs reached out to make economic colonies of England and Scotland's wool-producing districts. English contacts brought Normandy grain and Gascon wines. Hanseatic ships filled the harbor, which had to be expanded beyond Damme to Sluys to accommodate the new cog-ships, which were round like half walnut shells. In 1277, the first merchant fleet from Genoa appeared in the port of Bruges, first of the merchant colony that made Bruges the main link to the trade of the Mediterranean. This development opened not only the trade in spices from the Levant, but also advanced commercial and financial techniques and a flood of capital that soon took over the banking of Bruges. The Bourse opened in 1309 and developed into the most sophisticated money market of the Low Countries in the fourteenth century. By the time Venetian galleys first appeared, in 1314, they were latecomers. (Braudel 1984)

The population swelled, from some 35,000 inhabitants in 1340 to perhaps 100,000 before 1500, when the natural link between Bruges and the sea silted up, and the port of Antwerp became a rival.

Not every citizen of Bruges floated on the rising economic tide: the differences in income between the tradesmen and the patricians were great. Violent revolts, like those of 1280 and 1436-1438 were roughly suppressed. In the 1302 uprising, the ordinary people took the side of the Count of Flanders against the king of France and the propertied classes. First the French garrison was murdered, in May 1302, and two months later, Bruges took part in the Flemish victory in the Battle of the Golden Spurs on July 11, 1302.

After a decline during the late fourteenth and fifteenth centuries, Bruges recovered to an extent during the sixteenth century. However, the city had lost its leading trade position to Antwerp. The split from the Netherlands in 1584 led to the final decline of Bruges. By 1600, Bruges was a provincial city with a modest maritime reputation.

The first book in English ever printed was published in Bruges by William Caxton. King Charles II of England spent some of his time in exile here.