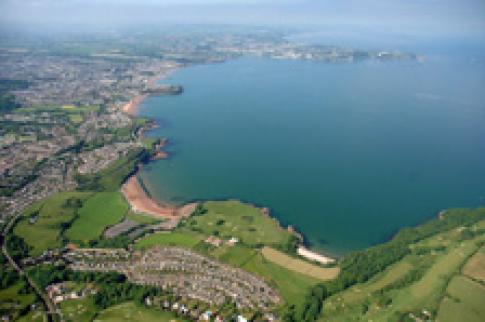 Starting at Cockington, named after the De Cockington family who held the manor from 1130 to 1350. This lovely village is well worth a visit with its beautiful church which was restored in 1882. There is a nice pub  and country house which is now a teashop, bakery and local craft centre incorporating a fascinating glass blowing premises. There are also various shops and tearooms in the village centre. Cricket is played in front of the manor house on Sundays and is a venue for various concerts and entertaining events.

There are original thatched cottages, pictured above is the restored game keepers cottage. The garden's and lakes can either be walked or seen from the comfort of a pony and trap. Visit the Organic Garden at Cockington Court to by fresh vegetables.
A little further along towards Torquay center is Torre Abbey meadows with its historic monastery dating from the 12th century, now a museum with fine art on display. Torre Abbey sands is a large and  popular beach, with a windsurfing school and plenty of nearby cafes.

In the town there are a large variety of shops including Castle Circus, Market St. The Wintergardens and The Pavillions.This is the centre for evening entertainment with Night clubs, restaurants and theatres.

At The Strand there is a Marina & Harbour with facilities for watersports such as sailing, jet-skiing and windsurfing. A number of clubs and schools provide lessons on a day to day basis.
This is a great spot to watch the regatta which includes a  display by the Red Arrows.

Torquay  is famous for its  picturesque walks, many with breath taking views over the ocean.
Thatchers Rock, off the coast at Torquay serves as home for a colony of seabirds and can be viewed from the shore or from one of the boat trips from the harbour.

Each of the beaches has its own character, and there are several to choose from , including Ansteys Cove, Watcombe, Babbacombe and Oddicombe with its cliff railway.

Meadfoot beach is generally quiet and has interesting rocks and places to explore, with good views across the bay.