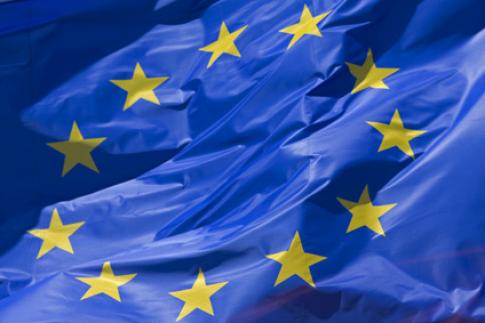 Opinion polls for the European Parliament elections on 23 May put the Brexit Party in the lead.

Each dot shows one poll result for one party. The trend lines are calculated as an average of the polls to date, with greater weight given to the most recent polls and to larger polls.

Three new polls suggest that support for the various political parties has settled, for the time being, into a fairly clear pattern.

Across Britain as a whole, the Brexit Party leads the pack with Labour in second and the Conservatives and Liberal Democrats battling it out for third place.

In Scotland, there's no evidence to overturn previous polls which put the SNP in a dominant position.

There's also been a Lucid Talk poll this week for the election in Northern Ireland. That uses a different voting system from the rest of the UK - the Single Transferrable Vote, where voters get to rank candidates in preference order. Seats are awarded through a process of elimination and redistribution of votes.

Three seats are available. At recent elections they've gone to the DUP, Sinn Fein and the UUP.

But the poll suggests the race for the third seat is likely to be close this time.

Sinn Fein lead the poll in terms of first preferences with the DUP clearly ahead of the rest in second place. But it's very close for third between the SDLP, UUP and Alliance Party.

If the actual votes follow a similar pattern, the final outcome will depend upon how votes are redistributed after the weaker candidates are eliminated.

More on a 'proxy referendum'

It's not easy to interpret the results of the European elections as a proxy for another Brexit referendum - people might vote on other issues and it's hard to know what to do about Labour and the Conservative voters.

Academics at The UK in a Changing Europe have suggested an interesting alternative approach. In a report they suggest that it would be useful to look at levels of turnout in different parts of the country.

If turnout goes up most in areas that voted Remain in 2016, that could indicate that Remain voters would be more likely to turn up in any future referendum. Whereas if voting is stronger in Leave areas, it could suggest the opposite.

13 May: More pain for the Conservatives and Labour as Brexit Party and Lib Dems move forward

New polls over the weekend suggest the Brexit Party has further strengthened its position.

Opinium and YouGov now have them on 34% with a big lead over Labour in second place. However in a third poll, by ComRes, the picture looks much less clear - the Brexit Party are only narrowly ahead of Labour by 27% to 25%.

It's not just the Brexit Party who are on the up. The Lib Dems have also made progress - in the past three polls they've been in third place, ahead of the Conservative Party.

In fact, in YouGov's poll, the Tories are down in fifth place, below the Greens as well.

Who can I vote for?

Enter your postcode, nation or region, eg West Midlands. This will take you to a new BBC page

Type in 3 or more characters for results.

One way that the results of the European elections will be analysed is as a sort of proxy vote for another referendum.

It will be interesting to add together the votes for anti-Brexit parties - SNP, Plaid Cymru, Lib Dems, Greens and Change UK - and compare the result with the combined score of UKIP and the Brexit Party.

By this measure, the polls suggest it's pretty close between these two groups, with the pro-Brexit group slightly ahead on average. However, it isn't necessarily a good guide as to how another referendum would go.

For one thing, people's reasons for voting will not just be about Brexit.

Another issue is that it doesn't account for Conservative and Labour voters. The two big parties might be near historic lows but they will still account for a decent proportion of voters.

Will those people be equally split between Leavers and Remainers?

It's possible to get a clue to this by looking at the detailed breakdown of the polling figures. This can be a risky business because the subsamples in polls aren't always representative so you can get misleading results.

However, in this case the pattern is very consistent. People who say they will vote Conservative are evenly split between Remain and Leave. But people who say they'll vote Labour favour Remain by about 3:1.

The polls that have been published up to now can fairly neatly be divided into two groups: before and after the Brexit Party's campaign launch on 12 April.

Before then, Nigel Farage's new group and UKIP seemed to be splitting the pro-Brexit vote pretty evenly - allowing Labour to enjoy a clear lead overall.

Afterwards, the Brexit Party has risen to the top of the pile, mostly at the expense of UKIP. There have only been two polls since with another party (Labour) in the lead.

As with all polls, it's important to remember that they are subject to error. And that can be particularly true when there are new parties in the frame.

Prospects for the Conservatives look bleak, according to the polls so far. They've been bumping around in the low to-mid teens. That would be by a distance the lowest share of the vote ever for the party in a national election.

Labour are faring better, although considerably below where they would want to be. A score in the mid-20s would mean little change since 2014 when they were runners-up to UKIP.

The creation of Change UK - The Independent Group, adds to an already crowded field for pro-EU, anti-Brexit parties.

They are fighting for votes with the Liberal Democrats, Greens, SNP and Plaid Cymru.

In Scotland, the SNP are on course to dominate. But in other parts of the UK, the divisions could be costly.

European elections in Britain use a form of proportional representation, but on a regional basis. Most of the regions have too few seats to guarantee a fully proportional outcome.

Yorkshire and the Humber 6

If the final result this time is close to what the polls have been suggesting, the anti-Brexit parties could end up missing out in several regions.

However, in the latest to be published, it perhaps looks as though in England the Lib Dems are emerging as the strongest of them - possibly receiving a boost after their very strong showing in the local elections.