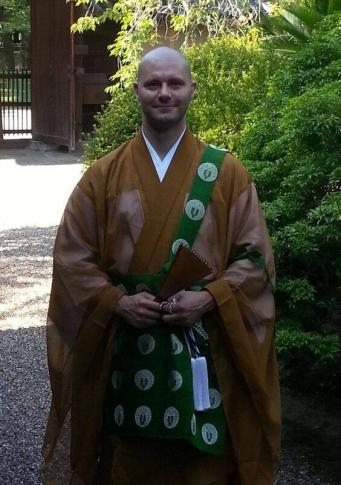 Gyoei Saile is seen ready to participate in the "Ryugi" examination at Kohfukuji Temple in Nara, on Nov. 13, 2019.

NARA -- A German-born Buddhism scholar-turned monk has passed an ancient exam that can only be taken once in a lifetime at a World Heritage temple in this western Japan city to become a fully-ordained Buddhist priest.

Gyoei Saile, 41, passed an oral examination held at the UNESCO World Heritage Kohfukuji Temple, one of the two head temples of the "Hosso" sect of Buddhism, in Nara on the night of Nov. 13 after fulfilling demanding requirements. The exam is held in accordance with the "Memorial Rite for Jion Daishi" and those who fail the test would need to prepare to leave their temple. This is the first time in eight years that the exam has been held at the Nara temple.

Born in Germany, Saile moved to the United States at the age of 12 with his family. Growing up under the influence of his physicist father who was knowledgeable about Japan, Saile studied classic Japanese literature at the University of California. In 2001, he went on to a graduate school of the then Osaka University of Foreign Studies to learn Buddhist literature. His research subject at the University of California graduate school was on the teachings of the Hosso sect, which is considered to be difficult to understand.

When he came back to Japan in 2010 to write his doctoral thesis, Saile took part in an exercise session at Kohfukuji Temple and became a monk in October the following year. He was given the Buddhist name "Gyoei."

Saile told the Mainichi Shimbun ahead of his exam, "I am nervous, as this is an ancient event that has been carried out over 1,000 years. I hope to perform in the exam satisfactorily and meet everyone's expectations."

In the "Ryugi" oral examination, a test-taker answers questions about doctrine in a dialogue style for about two hours, and while the contents of the exam are presented to the examinee beforehand, they must be answered all in Kanbun, classical Chinese used in Japan.

In addition, the monks taking the exam go through pre-examination training, in which they isolate themselves in a room to memorize a massive amount of Kanbun lines and learn the proper intonation for about three weeks prior to the test day. During that time, they only eat breakfast and lunch, and sleep while sitting up. They are allowed to go outside on the 1st, 6th, 11th, 16th, 21st, 26th and 31st of the month but only for pilgrimages to Kasugataisha shrine and other limited places.