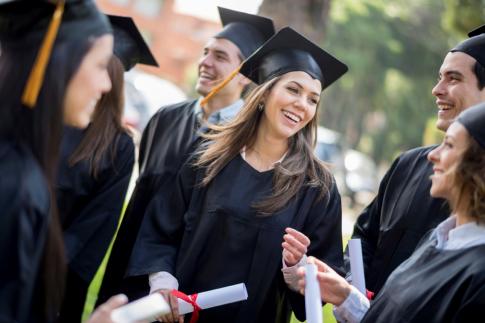 Businesses should pay more towards the cost of university fees in England, rather than putting the debt on the shoulders of students, suggests a report from the Higher Education Policy Institute.

The think tank report is calling for a completely different approach to tuition fees.

Instead of students borrowing and repaying £9,250 per year, the report says businesses should make repayments for graduates who they employ.

It is described as a "graduate levy", but with the employer rather than the graduate making the payments.

The argument, from report author Johnny Rich, is that employers are in many ways the beneficiaries and consumers of the university system - but so far they have avoided getting caught up in the argument about who should pay.

The author, a higher education consultant who works in university outreach, proposes a system in which businesses would make tuition fee repayments directly to the universities from which their staff graduated.

That would encourage universities to make sure their courses were worthwhile in the jobs market - and at the same time, it would mean students no longer having a millstone of debt.

There are some obvious difficulties.

For a start, the business community is likely to strongly object - and could cite the problems with the apprenticeship levy as a fluorescent warning sign that this won't work.

The CBI says such "a graduate levy would be the wrong approach" - and that as graduates are the "primary beneficiaries" of going to university, that they should pay for it.

Biggest winners and losers from degrees

Are students overpaying for tuition fees?

It would also need a huge amount of cross-subsidy and intervention to stop all the money flowing to the wealthiest universities teaching the most lucrative subjects.

As the Department for Education and Institute for Fiscal Studies reported this week, many arts courses have a negative return on incomes.

Linking funding to student earnings in this way would kill off any institution with a strong emphasis on arts and creative subjects.

And Labour would say a more straightforward approach would be its policy of paying for all fees from a higher level of corporation tax.

This might usually be dismissed as an idea heading straight for the great paper shredder in the sky.

But even though it is unlikely to be adopted - there are reasons this idea will not be dismissed out of hand.

The report on graduate earnings makes it increasingly hard to justify charging students £9,250 per year, when a third of male graduates will leave universities with no extra advantage in earnings.

But what is a better system?

The government-commissioned review of tuition fees seems to be inexorably moving towards the idea of cutting the headline fee - with suggestions that it will be reset at £6,500.

This figure might be tactical kite-flying, allowing the review to appear to have listened to the concerns of universities by eventually proposing £7,500.

But that still leaves a funding gap - and the idea of businesses paying more might be attractive for a government looking for cost-free alternatives.

Even if they don't back the idea, education ministers might want to cherry-pick some of the fresh thinking, which offers a different route to simply taking an axe to fees.

At present, part of the tuition fee is used by each university to ensure access to poorer students and to widen participation in higher education.

But this think tank report says it would be much more efficient to pool this money - about £800m per year - and spend it in a more strategic way.

This would also be part of a process of dismantling the idea of so much of higher education funding being bundled into the tuition fee.

Putting in so much in this way is also raising anxieties that it is going to bankrupt some universities - creating a disaster for staff and students, but a political nightmare for ministers and regulators.

As some universities expand rapidly, chasing fees, others are being pushed towards the financial brink.

Sharing the cost between student, taxpayer and business might seem like a way for a softer landing./bbc