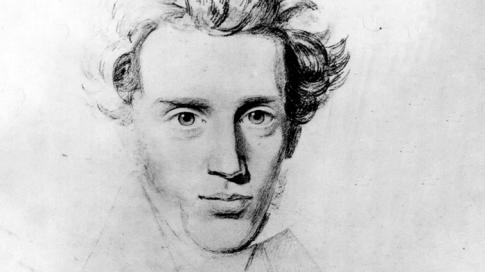 Søren Aabye Kierkegaard (5 May 1813 – 11 November 1855) was a Danish philosopher, theologian, poet, social critic and religious author who is widely considered to be the first existentialist philosopher.

“Anxiety is the dizziness of freedom.”

“It is perfectly true, as philosophers say, that life must be understood backwards. But they forget the other proposition, that it must be lived forwards.”

“In addition to my other numerous acquaintances, I have one more intimate confidant… My depression is the most faithful mistress I have known — no wonder, then, that I return the love.”

“Love is the expression of the one who loves, not of the one who is loved. Those who think they can love only the people they prefer do not love at all. Love discovers truths about individuals that others cannot see”

“A fire broke out backstage in a theatre. The clown came out to warn the public; they thought it was a joke and applauded. He repeated it; the acclaim was even greater. I think that's just how the world will come to an end: to general applause from wits who believe it's a joke.”

“Hope is a passion for the possible.”

“What is talkativeness? It is the result of doing away with the vital distinction between talking and keeping silent. Only some one who knows how to remain essentially silent can really talk--and act essentially. Silence is the essence of inwardness, of the inner life. Mere gossip anticipates real talk, and to express what is still in thought weakens action by forestalling it. But some one who can really talk, because he knows how to remain silent, will not talk about a variety of things but about one thing only, and he will know when to talk and when to remain silent. Where mere scope is concerned, talkativeness wins the day, it jabbers on incessantly about everything and nothing...In a passionate age great events (for they correspond to each other) give people something to talk about. And when the event is over, and silence follows, there is still something to remember and to think about while one remains silent. But talkativeness is afraid of the silence which reveals its emptiness.”

“The present state of the world and the whole of life is diseased. If I were a doctor and were asked for my advice, I should reply, 'Create silence'.”

“The difference between an admirer and a follower still remains, no matter where you are. The admirer never makes any true sacrifices. He always plays it safe. Though in words, phrases, songs, he is inexhaustible about how highly he prizes Christ, he renounces nothing, gives up nothing, will not reconstruct his life, will not be what he admires, and will not let his life express what it is he supposedly admires.”