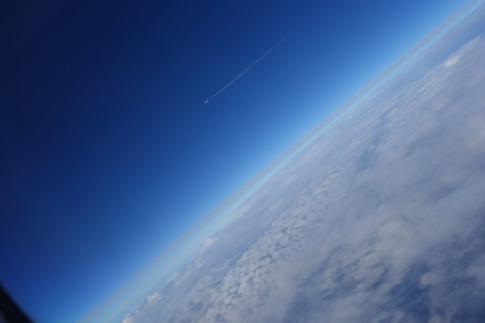 Many airlines are planning to resume flying, but they first need to reduce the risks of Covid-19

One of the consequences of the coronavirus pandemic has been the massive reduction in air travel in recent months, with daily flights down some 80% since the start of the year.

Some airlines have grounded their entire fleets, while others have been focusing on cargo flights, in an effort to help keep supply chains functioning and make what money they can.

Now, however, many carriers are making plans to get back in the air.

Ryanair, for example, says it plans to reintroduce 40% of its schedule from July, EasyJet plans to resume some flights in mid-June, while Air France KLM and Lufthansa will begin flying very limited schedules by the end of June. Hungarian carrier Wizz Air has already resumed flights.

In the UK, the situation is complicated by the introduction of controversial quarantine rules on 8 June - which will force passengers to isolate themselves for two weeks after arriving in the country.

But can passengers fly safely, or will they be at risk of infection?

The Covid-19 coronavirus is still relatively new, so accurate data on how it can spread between aircraft passengers is in short supply. But previous studies have looked at the spread of other respiratory illnesses.

Based on the available information, US Centers for Disease Control and Prevention generally tries to track down people sitting in the two rows in front and the two rows behind passengers found to have serious infections.

A 2018 study by researchers from Emory University in Atlanta attempted to model how passengers and crew moved about an aircraft, and how that might affect the transmission of infectious diseases.

But contrary to this, earlier research - led by the same academics - had shown that in real life cases passengers with Sars or influenza actually appeared to have infected a number of people well outside their immediate area.

Their explanation was that some of those who became ill had become infected in the airport, while embarking or disembarking from the plane, or from touching contaminated surfaces, rather than by breathing in infected droplets.

The simulations also indicated that, because cabin crew moved around the aircraft and had numerous contacts with different passengers, they could generate several new infections, and concluded "it is imperative that flight attendants not fly when they are ill".

Meanwhile, public health officials in Canada say they did not find any cases of further infection after two passengers on a flight from Guangzhou to Toronto were found to have Covid-19. The flight had 350 people on board, and lasted for 15 hours.

Although many people might think that sitting in a confined space for long periods would inevitably spread infections, the chief engineer at aerospace giant Airbus insists that is not the case.

Jean-Brice Dumont argues that the way modern aircraft are designed means that the air is intrinsically very clean. "Every two to three minutes, mathematically, all the air is renewed," he says. "That means 20 to 30 times per hour, the air around you is completely renewed."

Put simply, air is collected from outside the aircraft, normally through the engine, and mixed with recycled air from the cabin.

The recycled air, which is reused in part to keep temperature and humidity at the correct levels, is passed through HEPA (high-efficiency particulate air) filters that are similar to those used in hospitals. The Covid-19 virus is about 125 nanometres in diameter (a nanometre is a billionth of a metre) and is within the particle-size range that HEPA filters capture - 10 nanometres and above.

Mr Dumont says: "HEPA filters have standards, and the standards we use in commercial aviation are among the highest standards. They filter out 99.97% of particulates (small particles) of the size of Covid-19."

The flow of the air itself, he explains, is also designed to minimise infection risks.

"The air flows vertically. It is blown from above your head and evacuated from beneath your feet. That makes the level of propagation of anything in the air quite limited. So a passenger from row one, for example, cannot contaminate someone in row 20."

But is this enough? This regular flow of air, from top to bottom, can be disrupted by passengers leaving their seats or cabin crew moving up and down the aisles, thus altering the path of any airborne particles.

Some airlines require passengers to wear face masks or coverings

And crucially, while HEPA filters do work, they can't capture all Covid-19 droplets or aerosols before you might breathe them in, says Dr Julian Tang, consultant virologist at the Leicester Royal Infirmary and associate professor at Leicester University. He is also one of the team behind a study, published this month, looking at minimising the airborne transmission of Covid-19 in enclosed spaces.

"Filtration only works on mass airflows, most of the transmission during a plane journey will be those short-range face-to-face conversations. Close range aerosol transmission is what you have to be worried about on a plane, train or a bus - this is the biggest risk."

And even if you are further away, the risk is not eliminated, says Dr Tang. "How long Covid-19 can remain airborne depends on a range of factors. It varies between different people, it varies depending on the state of your infection, and you can't say all the droplets will fall to the ground within two metres.

"Some smaller droplets can stay suspended and travel up to 16 metres - and they all could be carrying the virus."

Dr Tang and his fellow authors say there is accumulating evidence for the important role of airborne transmission when it comes to infectious diseases such as Covid-19 or Mers, Sars and influenza, something which they argue has been overlooked.

But Mr Dumont believes that simple precautions, such as wearing masks, and coughing or sneezing into an elbow will minimise risks. "I want to be precise on that. We want people to wear masks," he says. This, he claims, combined with the rapid replacement of air, should minimise exposure.

So, would it also be a rational move to enforce social distancing on aircraft, for example by blocking out middle seats - a move contemplated by some airlines, but described by Ryanair's CEO Michael O'Leary as "idiotic"?

"We don't think so," says Mr Dumont. "It doesn't add to the risk reduction, we believe."

Virologist Dr Tang disagrees: "The problem is that if you're sitting next to somebody - 0.6 metres in economy, say - who's coughing and sneezing in that immediate area, that aerosol will reach you before it has time to reach the filtration system, get filtered and come back down again."

Meanwhile the International Air Transport Association (Iata), which represents airlines, has set out a detailed "biosecurity roadmap", which it is presenting as a blueprint to governments for reopening the industry.

Much of what it has to say focuses not on the flight itself, but on the time spent in the airport - where large numbers of people could normally be expected to come into contact with one another. It wants that time to be minimised as much as possible.

As a result, it is calling for:

temperature testing to be carried out at entry points

passengers to provide health and contact information before arrival

the use of automated processes such as bag drops at the airport itself.

The actual flight is considered to be relatively low risk - and according to Iata vice president Nick Careem, "physical distancing on board is not necessary".

The emphasis, he says, should be on enhanced and frequent deep cleaning of the cabin, as well as measures to avoid passengers congregating in specific areas. That could include banning queues for the washrooms.

The key message, Mr Careem says is that "there is no silver bullet, no single measure that can prevent infection".

Dr Tang, meanwhile, says he would fly with precautions. "If I get on a plane, I'll be wearing a mask. It's not 100% but at least I'll have some protection."