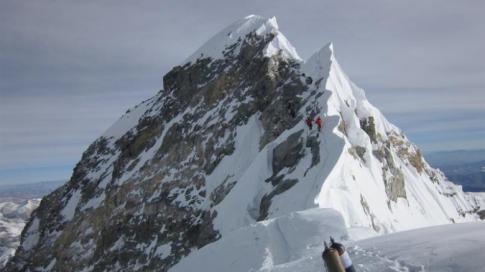 The record number of deaths this year on the world's tallest mountain underscores the immorality of seeking to reach the summit. But even if you are lucky enough to reach the top without passing a climber in need of help, you are still choosing your personal goal over saving a life.

PRINCETON – In 1953, when Edmund Hillary and Tenzing Norgay became the first people to reach the summit of Mount Everest, I was seven years old. For a time, I was immersed in the stories of the epic climb. It seemed like an achievement for all of humankind, like reaching the South Pole. Would there still be any frontiers left, I wondered, by the time I grew up?

A photo of the southern summit ridge of Everest has brought these memories back to me. But what a different Everest this is! The splendid isolation of the top of the world has gone. Instead, there is a long line of climbers waiting their turn to stand briefly on the summit.

It’s not hard to see why. As the expedition company Seven Summit Treks advertises: “If you want to experience what it feels like to be on the highest point on the planet and have strong economic background to compensate for your old age and your fear of risks you can sign up for the VVIP Mount Everest Expedition Service.” You need the “strong economic background” because it will cost you $130,000. There are less expensive ways to climb Everest, but they all start with the $11,000 fee that the Nepalese government charges for a permit.

We shouldn’t object to the government of a low-income country seeking revenue from wealthy foreign climbers. But even with the best support money can buy, in the thin air above 8,000 meters, people die – 12 in 2019 alone. There are at least 200 bodies still on the mountain, some in crevasses, others buried by avalanches. Still others have been described as “familiar fixtures on the route to Everest’s summit.”

It used to be taken for granted that if a climber was in danger, others would help, even if that meant abandoning their own plans. No longer. In 2006, it was reported that David Sharp, who had chosen to climb Everest without Sherpa support, slowly froze to death while about 40 climbers passed him on their way to the summit. Edmund Hillary found it “horrifying.” Later reports suggested that most of the 40 did not notice Sharp, or were unaware that he needed help. But some climbers, like the Australian Brad Horn, have been quite explicit in saying that they are on the mountain only to get to the top, and will not stop to help anyone else until they have achieved that goal.

I’ve used the example of rescuing a child drowning in a shallow pond to explore questions about our obligation to save the lives of strangers. When I ask my students if they would wade into a shallow pond to save a drowning child, even if doing so would ruin their favorite, and most expensive, pair of shoes, they tell me that you can’t compare a child’s life with a pair of shoes, so of course they would save the child. What if the only way to save a child from being struck and killed by a runaway train is to divert it down a siding where it will destroy your most precious possession, a vintage Bugatti, into which you have sunk most of your savings? Never mind, most still say, you have to save the child.

If that’s right, then why does climbing Everest allow one to refrain from saving the life of a fellow climber? Is it because, as Horn says in defending his attitude, “Everyone knows the risk”? That may be true, but, as Immanuel Kant argued, our obligation to help strangers is grounded by our own desire to be helped when in need. Hence, we cannot will, as a universal law, that people pass by strangers in need. Horn would need to reply that, had he needed to be rescued, other climbers would have been justified in leaving him to die as they headed to the summit.

In any case, even if you are lucky enough to get to the top of Everest without passing a climber in need of help, you are still choosing to reach the summit rather than to save a life. That’s because the cost of the climb would be enough to save the lives of several people, if given to an effective charity.

I enjoy hiking, and being in wild places. I like hikes that take me to a summit, especially one with a view. So I can understand why Hillary wanted to climb Mount Everest. But I have trouble understanding why anyone would see that as a worthwhile goal today. It does not require great mountaineering skill, and it is very far from a wilderness experience. Arnold Coster, a Dutch mountaineer who organizes Everest climbs, says that many of his customers are more like trophy hunters than mountaineers. Tim Macartney-Snape, who climbed Everest in 1984, says that today’s climbers are “more interested in talking about it at a cocktail party than actually being in the mountains. It’s a status-enhancing thing.”

If that is right, one can only regard it as a pity that the desire for status leads us to set goals that involve pointless or even harmful activities, rather than goals that have value independently of status, like helping those in need and making the world a better place.