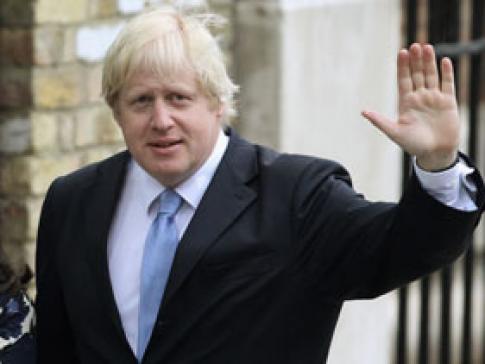 Boris Johnson has said he will run for the Conservative Party leadership after Theresa May stands down.

Asked at a business event in Manchester if he would be a candidate, the former foreign secretary replied: "Of course I'm going to go for it."

Mrs May has said she will resign once MPs back her Brexit deal.

A decision on her exit timetable will now take place after the House of Commons votes on her Brexit bill early next month.

Sir Graham Brady, chairman of the 1922 Committee of backbench Conservative MPs, made the announcement following a meeting between the prime minister and his committee's executive on Thursday. He said it would bring "greater clarity" to Mrs May's intentions.

Several senior Conservatives are expected to enter the contest for the leadership, with the winner also becoming prime minister.

Asked at the British Insurance Brokers' Association conference in Manchester whether he wanted to be in charge of his party, former London mayor Mr Johnson said: "I'm going to go for it. Of course I'm going to go for it. I don't think that is any particular secret to anybody. But you know there is no vacancy at present."

Mrs May's withdrawal agreement with the EU has been rejected three times by the Commons. And she has come under increasing pressure to go after the Conservatives lost more than 1,300 councillors in recent local elections.

Many Conservative MPs are also unhappy that Mrs May is holding cross-party talks with Labour in an effort to get her withdrawal agreement through the Commons.

Mr Johnson, a leading Brexiteer who quit the cabinet last year over the terms of the agreement, said: "I do think there's been a real lack of grip and dynamism in the way we approached these talks [with the EU]."

The MP for Uxbridge and South Ruislip added: "We've failed over the last three years to put forward a convincing narrative about how we can make sense of Brexit and how to exploit the opportunities of Brexit."

In a Conservative leadership contest, MPs hold a series of ballots, with the candidate gaining the fewest votes eliminated at each stage.

Once the field is reduced to two, the winner is chosen by a vote of party members. This wider vote did not occur in 2016, when Mrs May became leader, after the second-placed candidate among MPs - Mrs Leadsom - stood aside.

International Development Secretary Rory Stewart and former work and pensions secretary Esther McVey have announced they will run and Commons leader Andrea Leadsom has said she is "considering" doing so.

Publisher William Collins has announced that the biography of David Cameron - whom Mrs May replaced at Conservative leader and prime minister following the EU referendum - will be released in September.